University of Pittsburgh at Greensburg

University of Pittsburgh at Greensburg 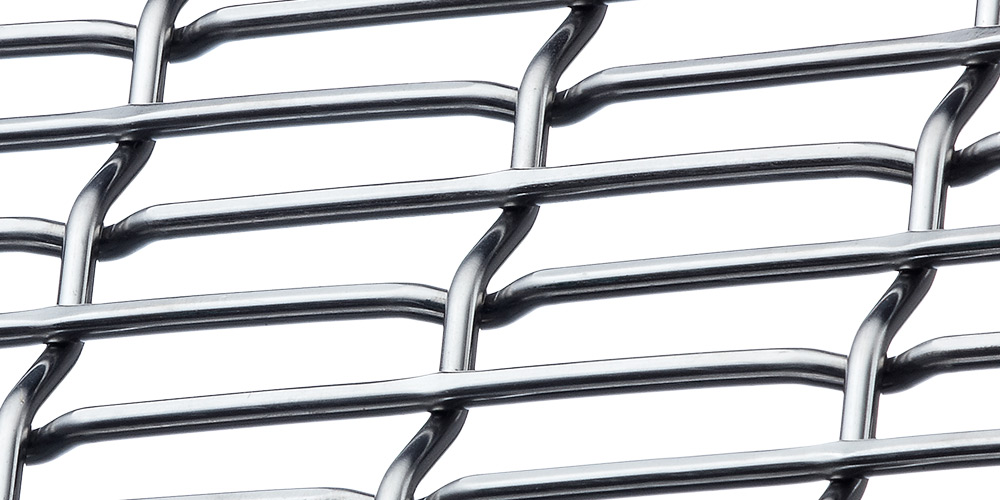 The University of Pittsburgh at Greensburg chose Banker Wire mesh to outfit its first building designed for LEED Gold certification. Frank A. Cassell Hall, formerly known as the Sustainable Office and Classroom Building, is a two-story, 16,837 square-foot facility. Its space includes a state-of-the-art computer lab, a video-conferencing classroom, a server room, offices and a technology training classroom. Its environmental sustainability and aesthetic features – including architectural woven wire mesh infill panels from Banker Wire – accentuate its connection to the natural world.

Enclosed in glass, the building’s main internal stairway allows for an expansive view of the surrounding woods and stream. Metal mesh infill panels in a custom angle iron frame, both manufactured by Banker Wire, form a semi-transparent stairway railing that complements the space’s glass facade. The railing’s transparency was an especially important feature, as the designers wanted the outdoors to be visible from all of the occupied spaces within the building. The Banker Wire infill panels and angle iron frame were also used on the building’s exterior ramp and plaza, where they allow for the uninterrupted transmission of natural light into the building.

Combining two different crimping styles, the FPZ-16 architectural wire mesh used at Frank A. Cassell Hall has rectangular openings more than three times as long as they are tall. The orientation of this weave makes a strong design statement. Where the infill panels are installed parallel to the staircase’s slope, the long diagonal lines formed by the mesh pattern slice into the vertical and horizontal lines of the glass façade’s frame. The layering of these lines brings a sense of depth and texture to this modern space. Where installed vertically, the architectural mesh’s aspect ratio noticeably deviates from that of the façade, creating a geometrically interesting relationship.

The angle iron frame and woven wire mesh infill panels were precisely crafted by Banker Wire to integrate seamlessly, creating a beautiful and strong final product. Custom mounting tabs, which are hidden from sight, securely and subtly hold the angle iron frame in place along the staircase, ramp and plaza. The mounting tabs blend into the railing structure, allowing for an almost invisible interface that matches the simple aesthetic of the space. 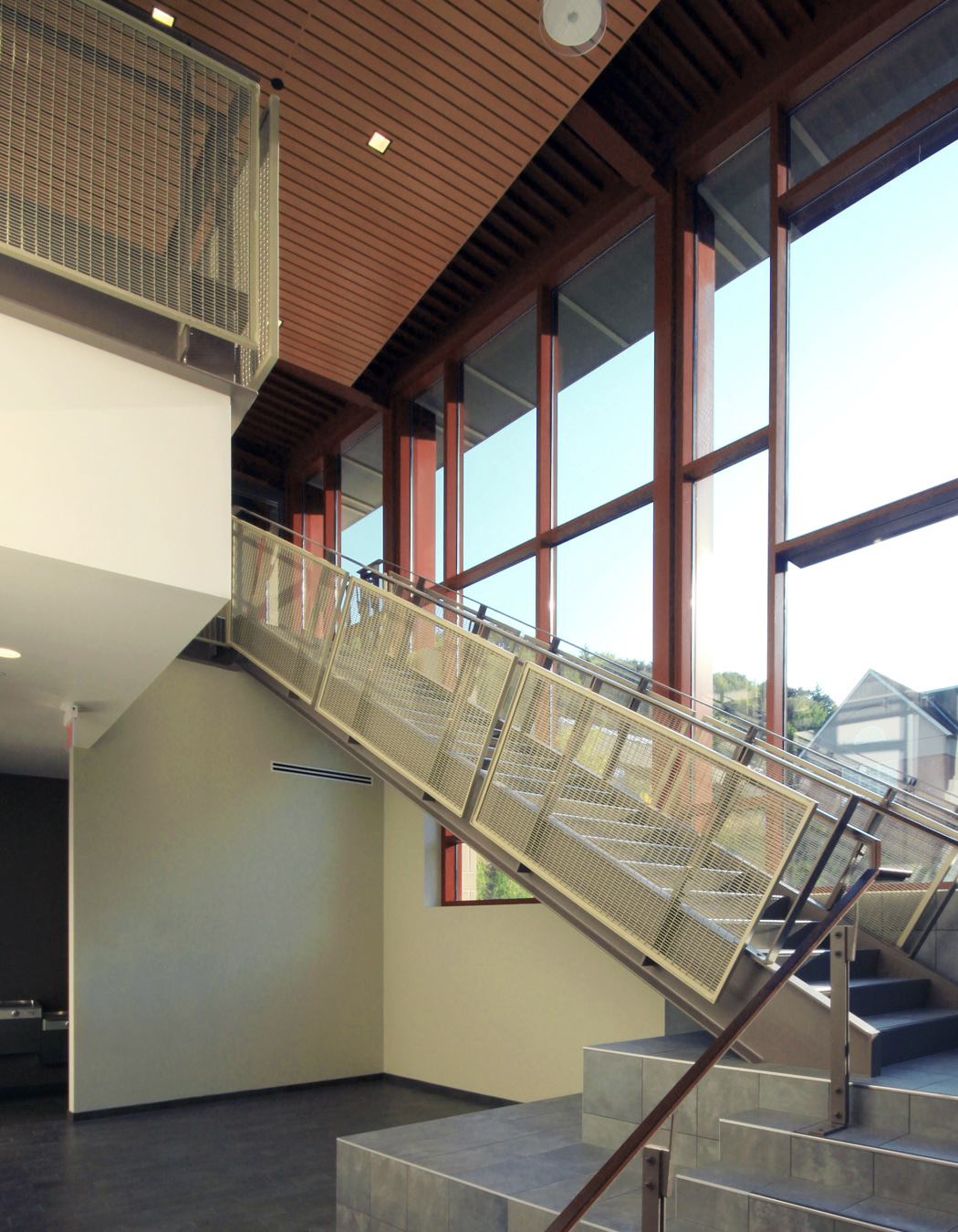 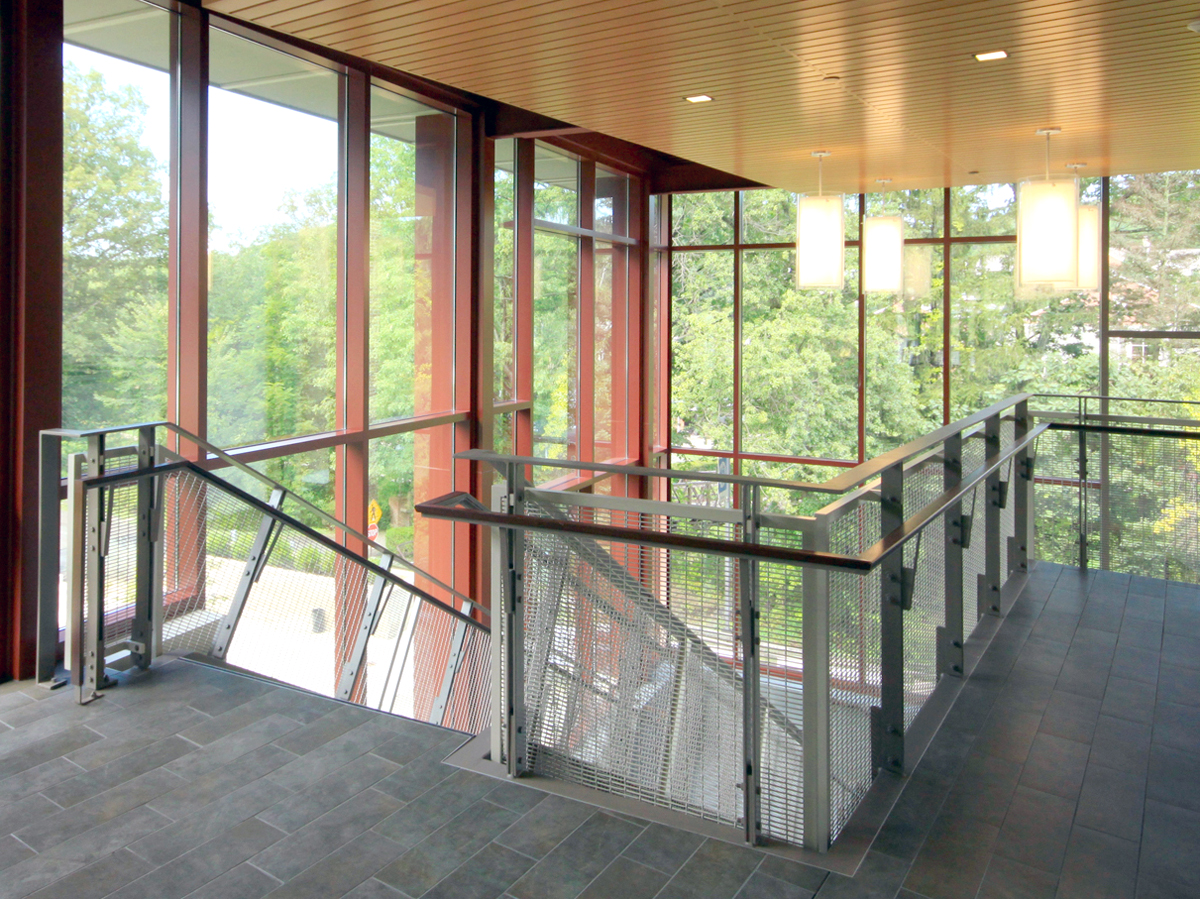 Press Related to University of Pittsburgh at Greensburg