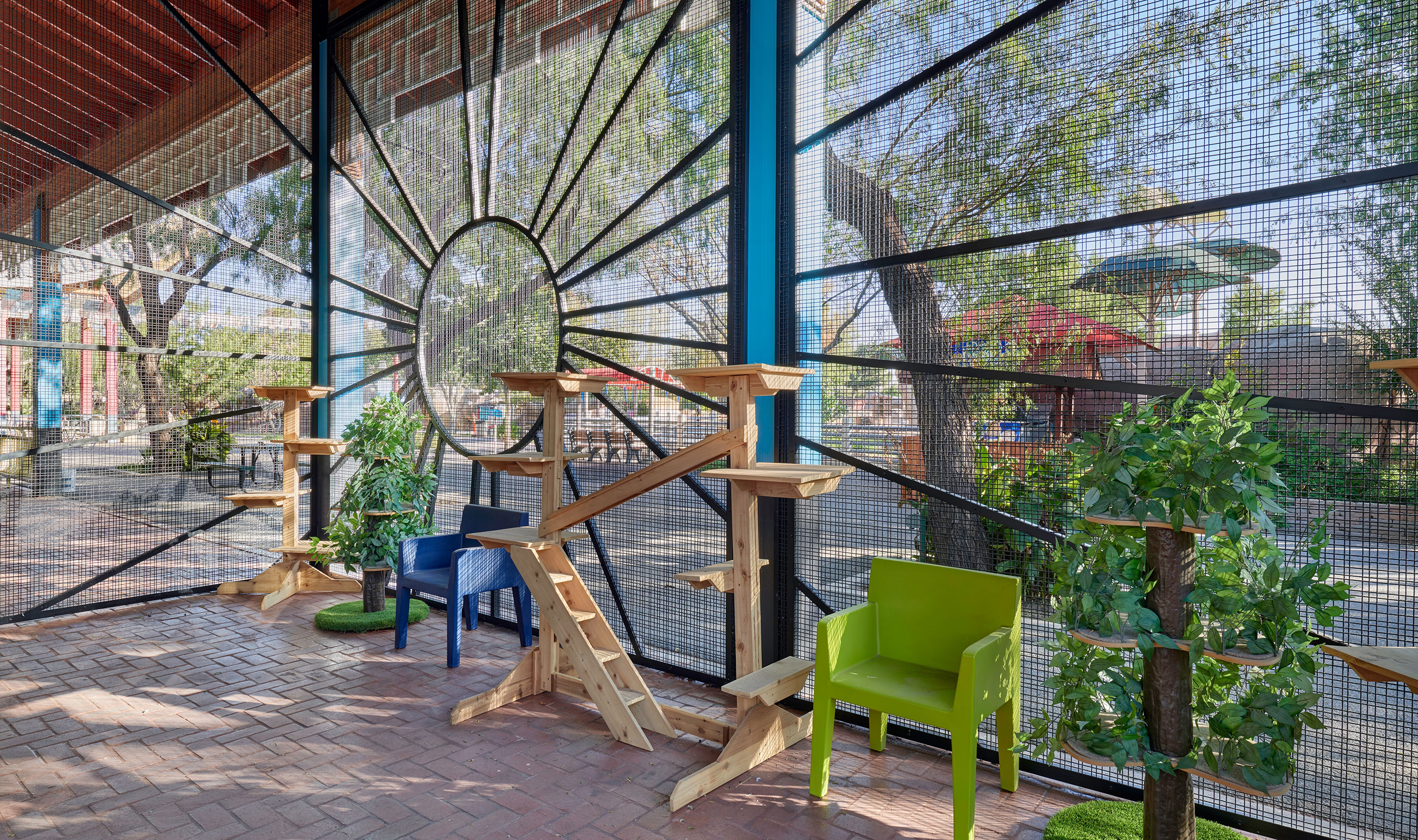 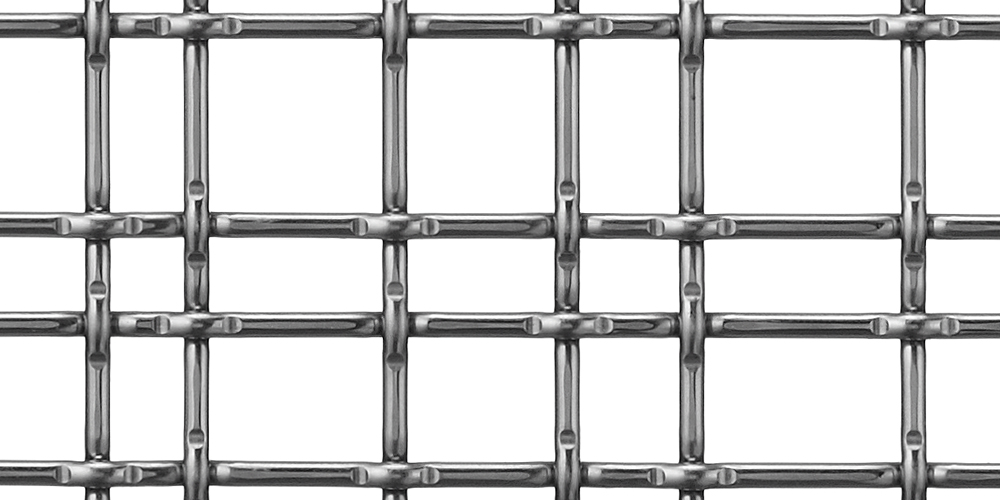 At the El Paso Zoo’s Cat Adoption Center, MNK Architects was scoped with creating a fun, colorful, and family-friendly environment where the potential adoptees and cats could have one-on-one encounters. In the renovation of the Cat Adoption Center (previously known as The Asia Exhibit), MNK relied heavily on Banker Wire’s SJD-2 wire mesh pattern to create a key architectural installation that was both functional and decorative, helping realize the overall design scheme and purpose of the Center.

Asian motifs underscore the architecture and design of the Cat Adoption Center—a structure that was originally built in the early 1990s. Inspired by the building’s original design, MNK Architects’ renovation built on this existing concept, further emphasizing the unique design details that nod to Asia. The exterior wire mesh divider screen is one such installation, created with Banker Wire’s SJD-2—a pattern featuring 18 wires over a span of just 15 inches, with a large open area that helps connect the interior with the exterior. A complex, unexpected woven wire mesh pattern that is stable and strong, SJD-2 was ideal for this application, which simultaneously functions as a feature wall and space divider. This pattern also allows natural daylight and airflow to enter the space, while the seemingly infinite wire mesh pattern—visually pleasing in its irregularity—provides physical stability and sturdiness.

Since the space is not only occupied by people, but also cats, the SJD-2 pattern offered the perfect solution to the safety and security of the animals—the necessary open area of the pattern prohibits the release of any ‘escape artists’ while still allowing activity within the space to be viewed from the outside. Allowing passersby to see the activity of the interior—the interactions between the cats and potential adoptees—SJD-2’s selection was inherently tied to the Center’s vision and mission of better promoting adoptions.

On the wire mesh screen, the notable ‘Rising Sun’ motif is symbolic of the rising of various cultures recognized in Asia—and also a nod to the varying breeds at the Cat Adoption Center. Signifying the ‘coming together’ of these animals from various regions, the ‘Rising Sun’ design also highlights the unity of El Paso (known as Sun City). The sun design was constructed using 1.15 x 1.5” (16 gauge) steel tube framing, which can be seen on the exterior and backed by a 1.5” continuous flat bar, screwed to the tubing with the architectural mesh in between the two elements. This method aided in providing rigidity in its attachment to the existing structure. An anchoring device to the existing structure was also implemented to better conceal the connection of the mesh with the tubing structure. Finally, the mesh was powder coated to achieve a homogeneous aesthetic, when placed next to the supporting structure.

SJD-2 epitomizes Banker Wire’s customization capabilities—specifically, how its precise weaving process allows the creation of irregular mesh patterns. Overall, the mesh provides a subtle yet commanding backdrop, well suited in highlighting the striking ‘Rising Sun’ design. “We wanted a material that provided safety and security, while allowing visibility to the cats,” says Jennifer Countryman, MNK Architect, and Elisa Martinez, MNK Intern Interior Designer. “Banker Wire’s mesh is elegant, and catches one’s attention in a subdued way—accentuating and elevating the cats on display, and the unique Asian architecture that they sit within.” 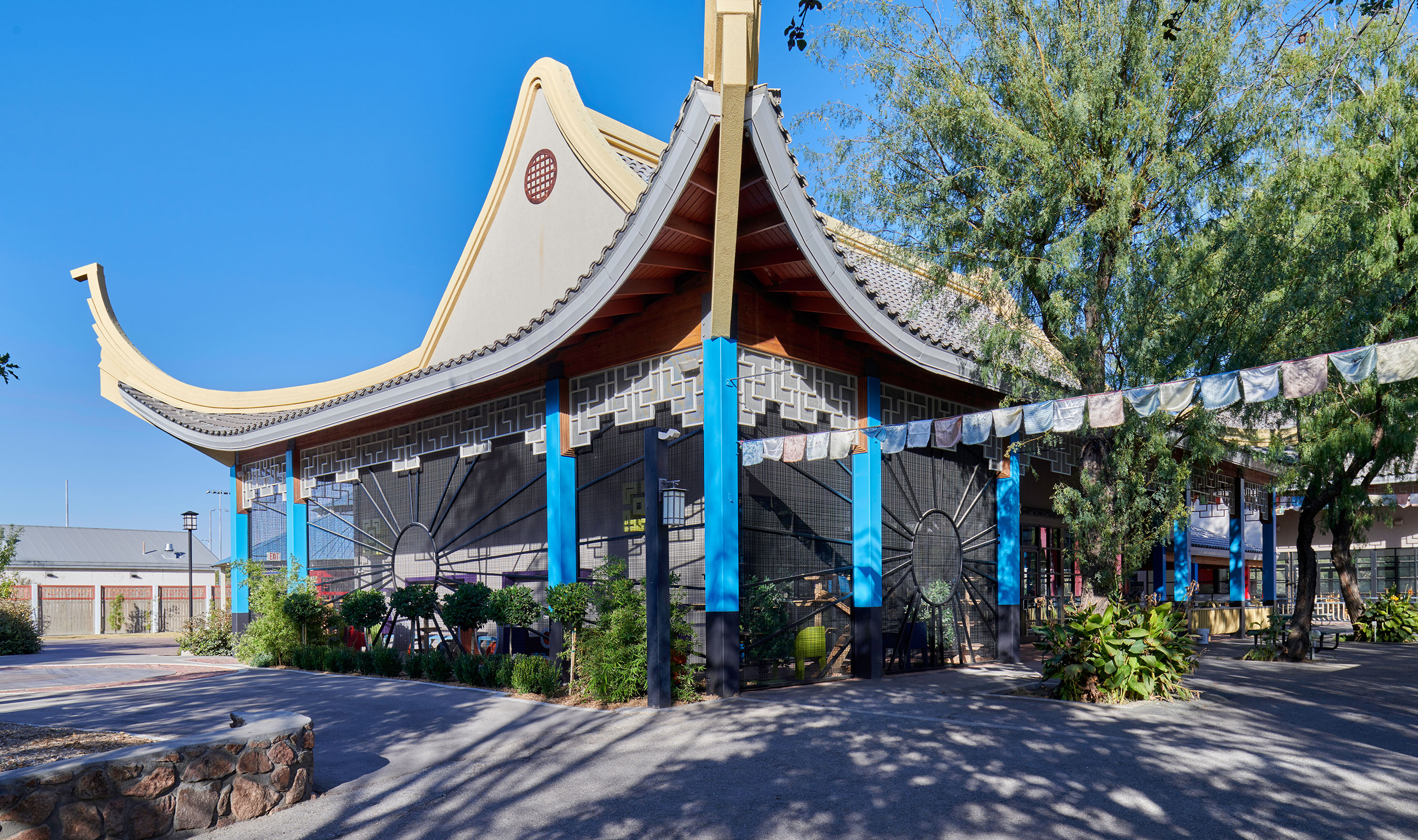 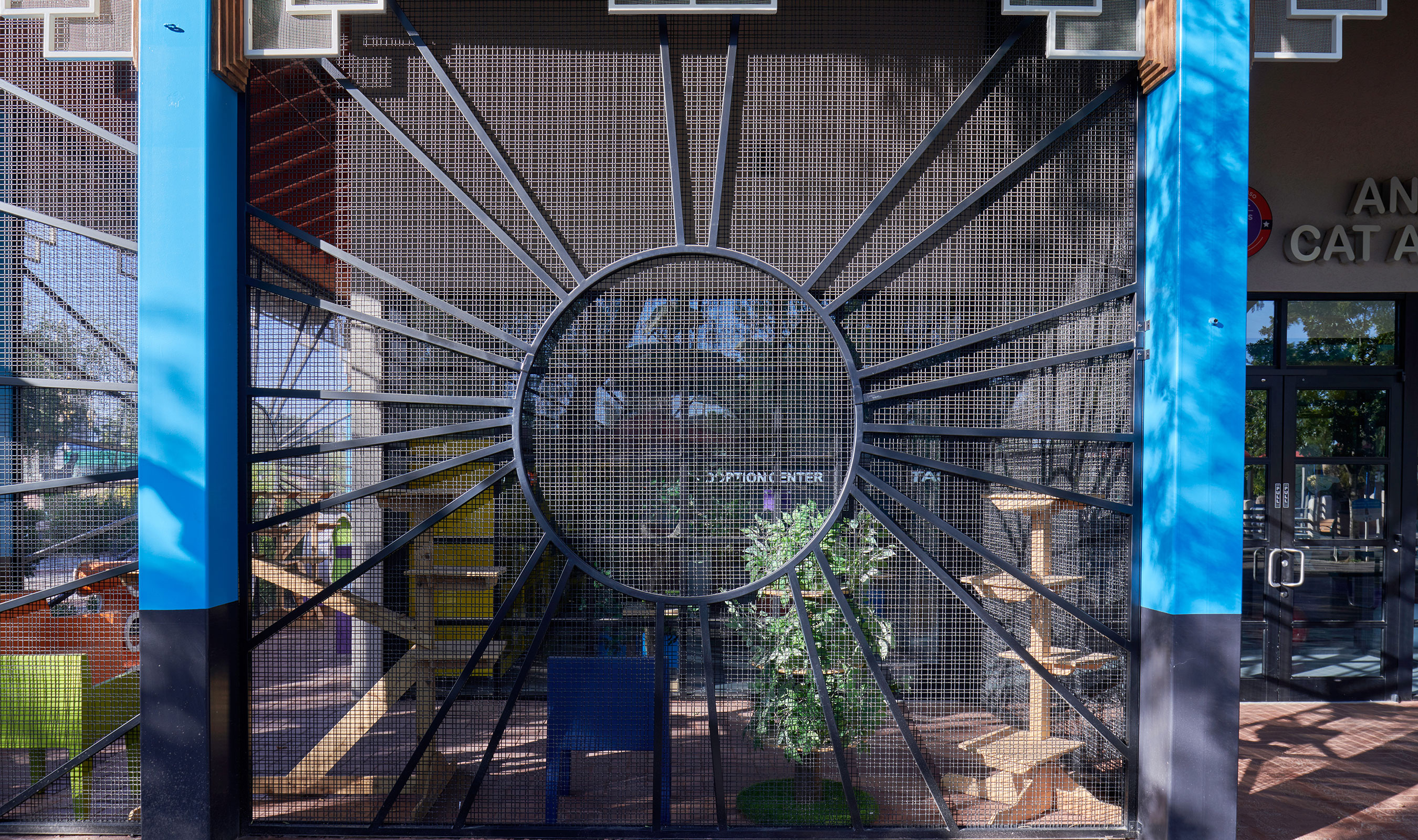 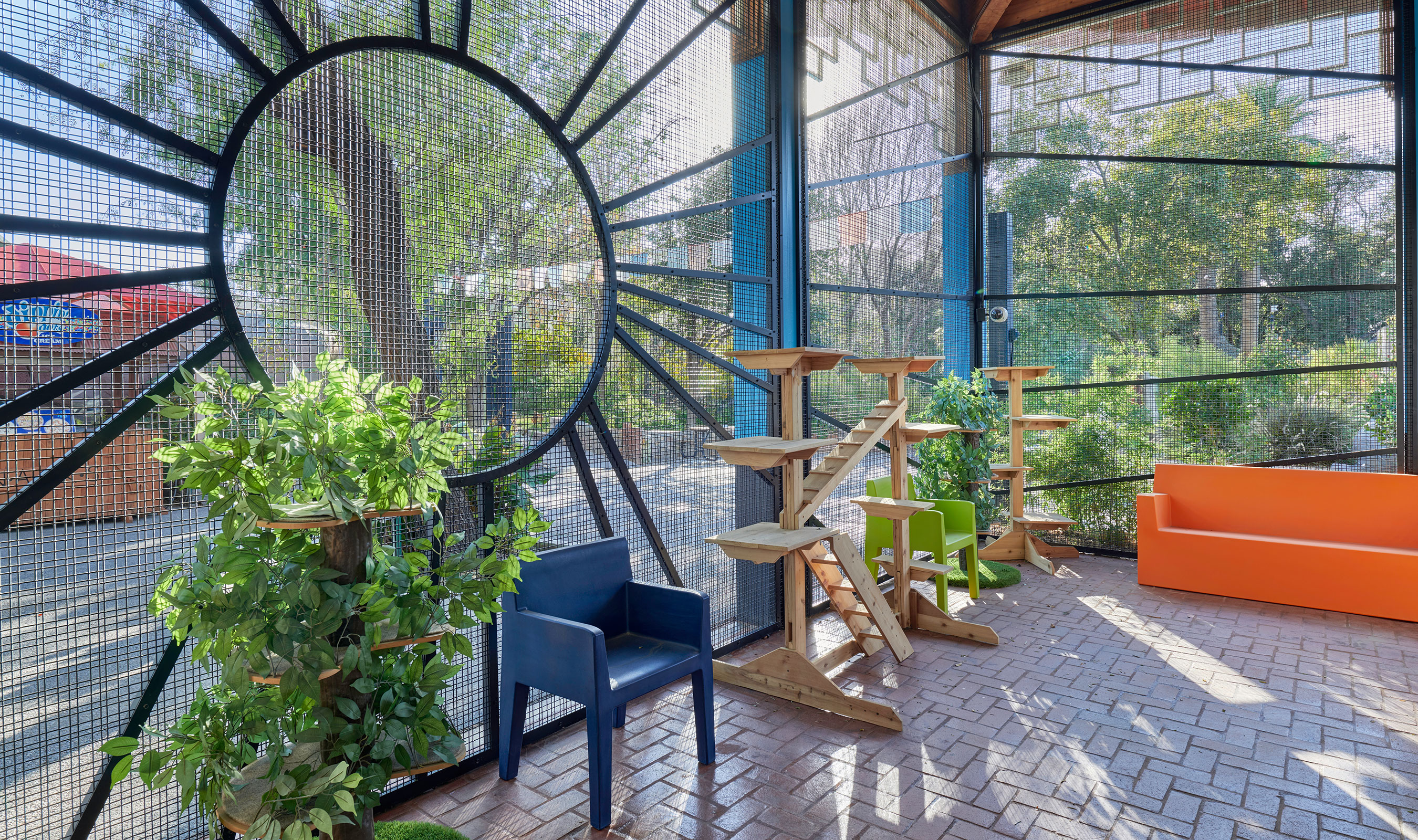 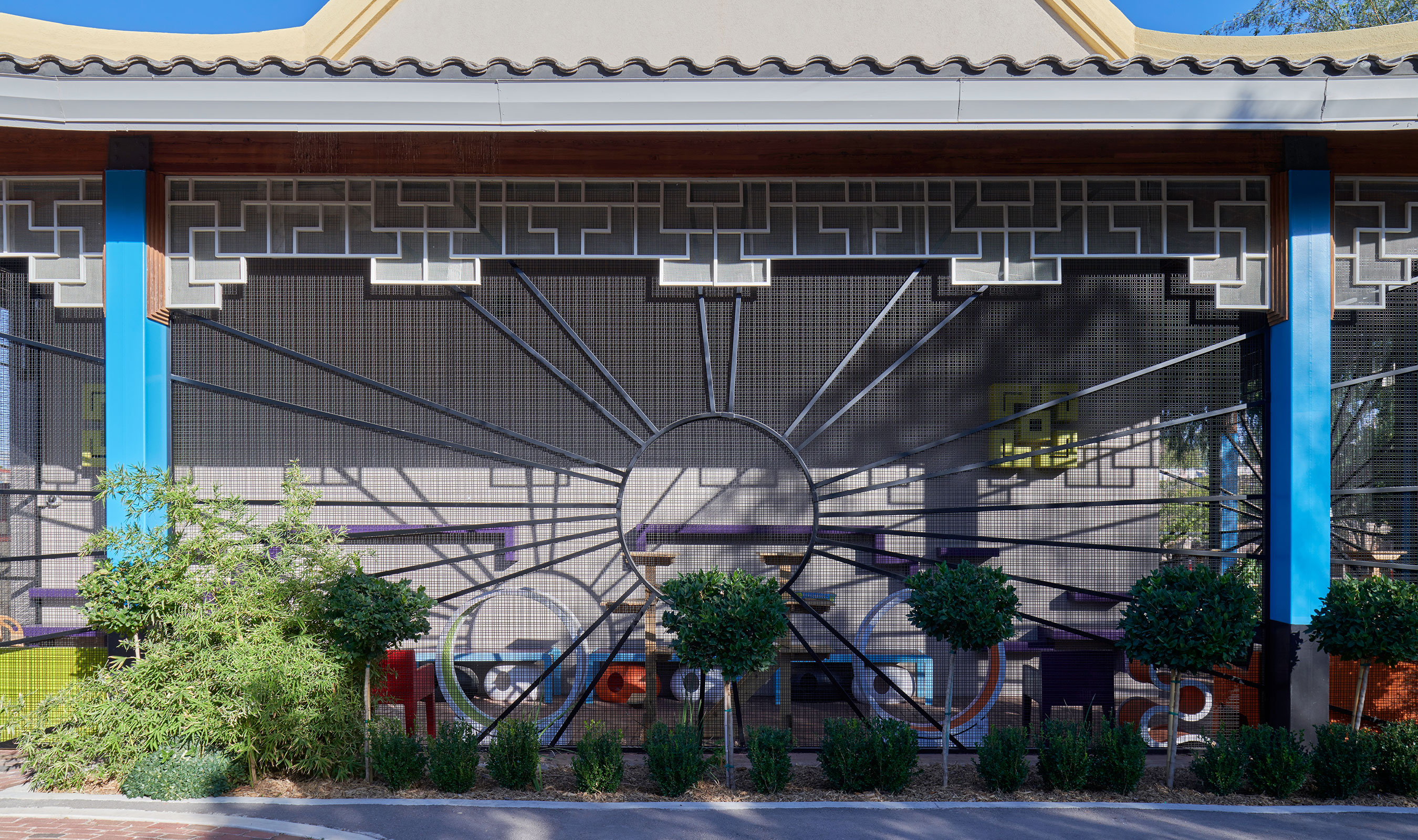 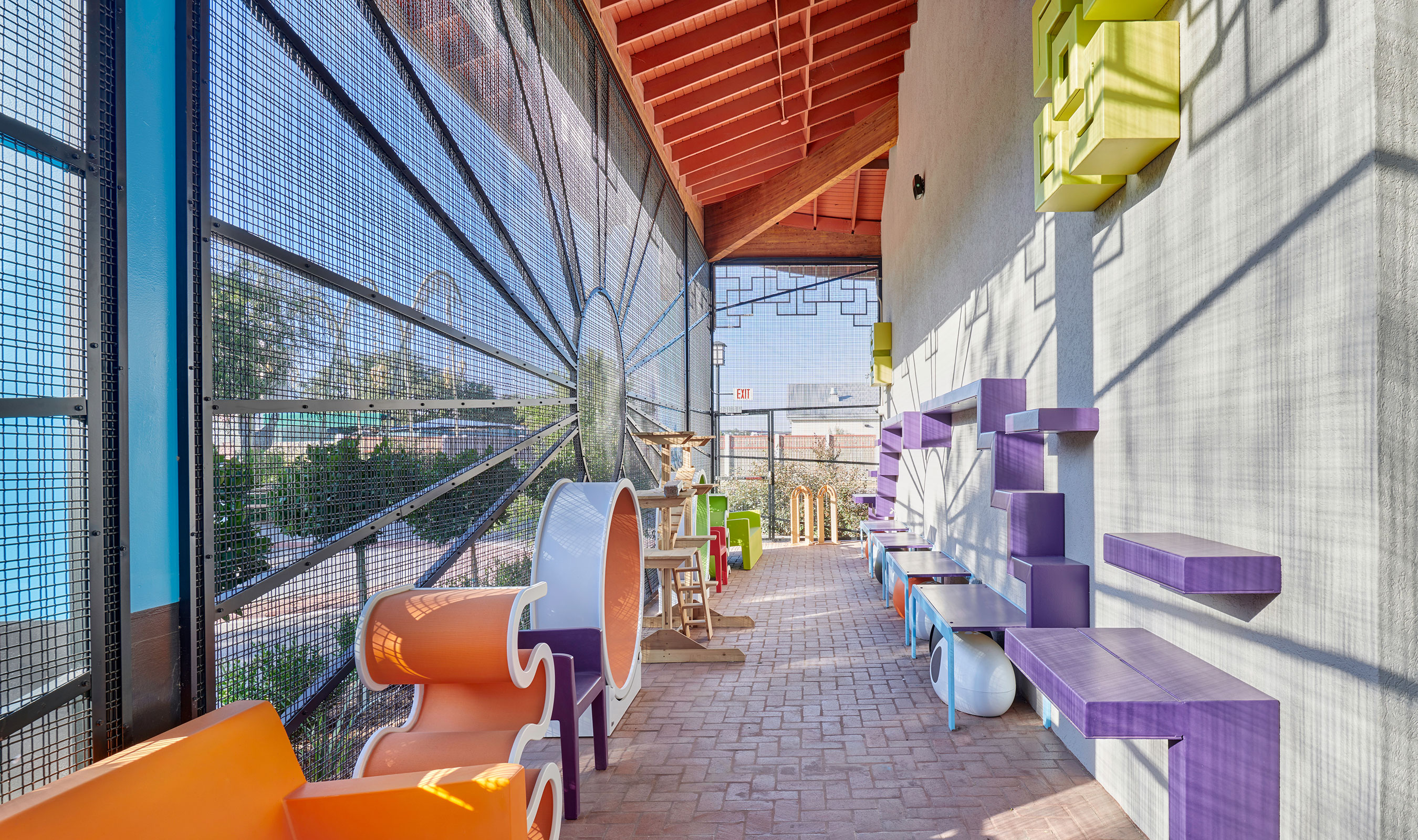 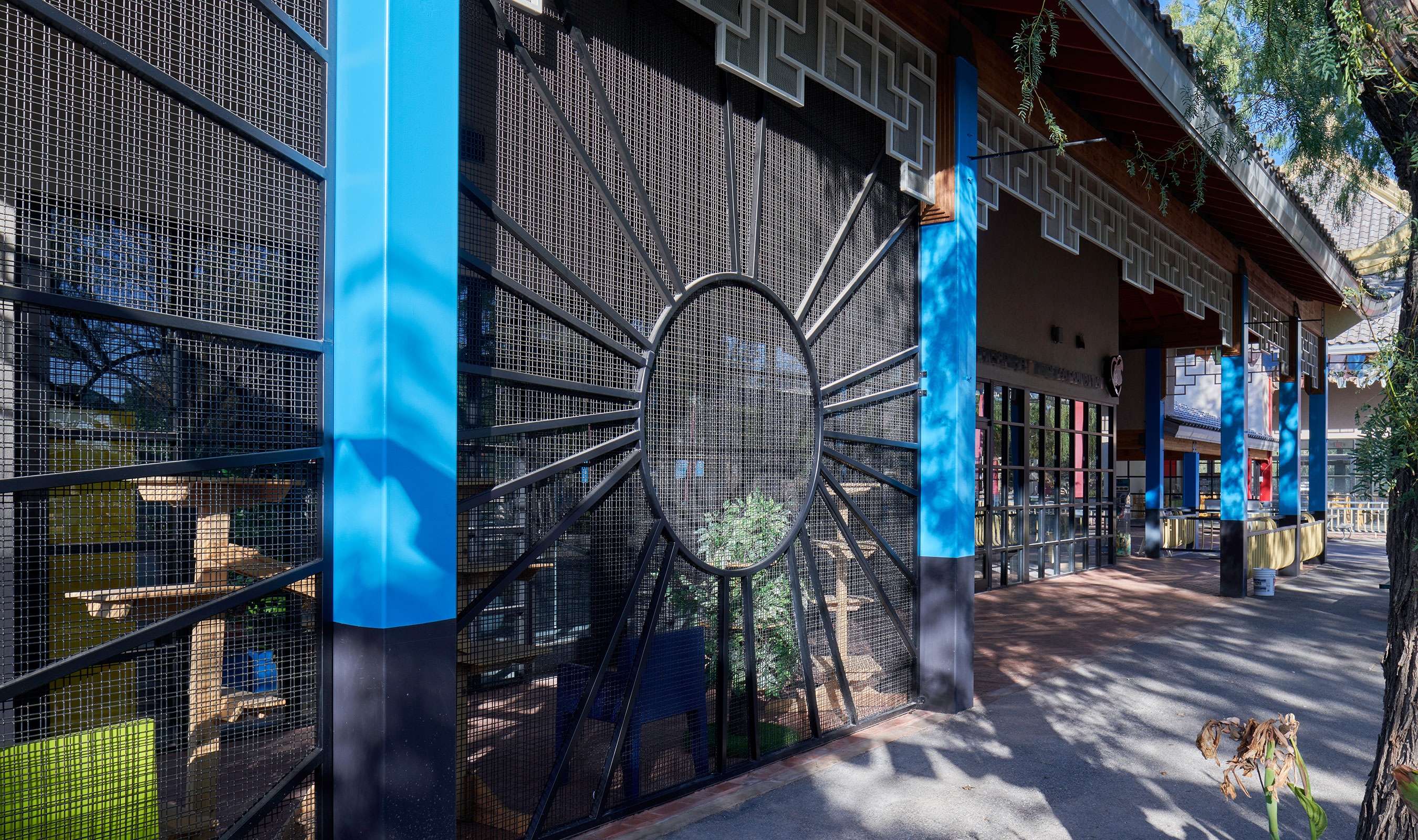